I realized the other day that I rarely write race reports about half-marathons, which is kind of silly.  I love half-marathons! They’re definitely my favorite race distance: endurance + speed, with the added bonus of being able to recover from them in 2-3 days.  I guess I haven’t been writing about them because they don’t feel epic enough, but fuck that, I’ll make them epic.

Anyways, this was actually supposed to be a marathon race report, as Brian and I had originally signed up for the Mountains 2 Beach Marathon in Ventura, California, in hopes that both of us would be able to qualify for the Boston Marathon.

The race prides itself on its high number of Boston qualifiers, and even has 3:33 and 3:38 pace groups specifically for people who are trying to beat the qualifying standard so they can get into the race. The temperatures are perfect and it’s got a ton of descent. We thought it would be a good opportunity to finally get a BQ for Brian and a re-BQ for me.

But then his mom got really sick in October and passed away in February. I got sick with some sort of superbug that knocked me on my ass for three weeks in April. We traveled a bunch and Brian also had some race FOMO that had him doing Florida 70.3.

Finally, with six weeks to go, we made the call to pull the plug on BQ 2017 and to instead run the half-marathon.

I was bummed out by it, no doubt, but I knew it was the right thing to do.  Plus it meant we could actually enjoy our time in Ventura instead of spending the days leading up to it with our feet up and then the days afterwards hobbling around and wincing every time we sat on the toilet.

And enjoy ourselves we did!  I’ve been to Southern California a lot – I was born in L.A. and my grandma lived in Burbank for nearly 50 years – but I’d only been to the beach communities north of L.A. once, way back when I was a kid.  I like L.A. okay but I also know it wasn’t the place for me.  Too big, too busy, too much traffic.

But Ventura! I’m not exaggerating when I say I fell head over heels in love with Ventura.  I walked like five miles every day. I drank a dozen different local craft beers.  I had mai tais at a tiki bar with Brian, my long-time zine friend Lindsay and her husband Michael.  We had fish and shrimp burritos at Spencer Makenzie’s and tacos at Beach House Taco. 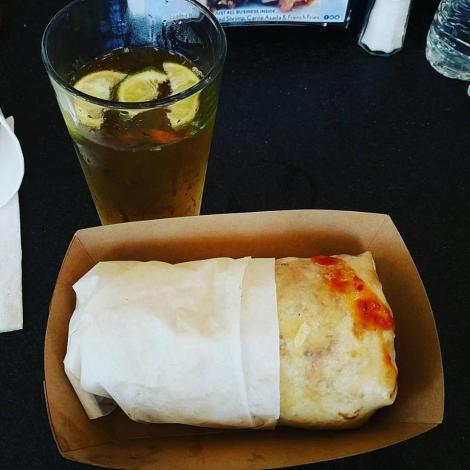 Shrimp and fish burrito at Spencer Makenzies, and of course, a beer with limes.

I did yoga at a studio called Yoga Jones, which I went to specifically because it shared a name with the character from “Orange is the New Black.”  (I did not, however, pick up a t-shirt with a picture of a cat and the caption “Be Here Meow,” and I really, really wish I had.)  We swam laps at the local community pool (but I did not go in the Pacific Ocean because the water was 60 degrees and fuck that shit). 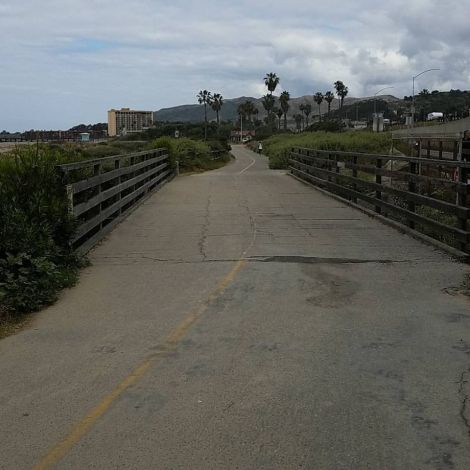 I ran on this amazing trail along the beach and luxuriated in the rare sensation of cool temperatures and low humidity and how it made me feel like I could run fast for-freaking-ever. I’d tried to make the most of the six weeks between the last day of my superbug and race day, but… well, I’ll just say me and my fellow Floridians don’t call it “training on the surface of the sun” for nothing.  Running on a cool, dry, overcast day along the California coast felt like being cradled gently in the hands of the running gods in comparison to what I’d been training in.

The conditions were pretty similar on race morning. I’ve often heard it said that the best race-day temps are the ones where you’re cold before the race starts, and as much as I may hate it at the time, this is always the case for me.  The race organizers had us ferried by bus up to the race start at the Ventura County Unified School District building – the marathoners started in Ojai, ugh, so much race #FOMO – and then we milled around for about an hour until race start, which was at the chipper hour of 6 a.m.

Brian and I ran around the parking lot for about 15 minutes and then did our stretches.  (I know a lot of people say you don’t need to stretch – something about how it makes your muscles lose their snap – but I’ve experimented both ways and I do much better when I can stretch out after warming up.)

And then we lined up in the corrals according to bib color.  We had yellow bibs, which were for people who expected to go under 1:40 and thus were the first people to line up and go.  Brian was aiming to break 1:40, which he hadn’t been able to do yet, and I was hoping to break my PR of 1:37:42.  There weren’t a lot of people in our corral, which gave me a brief flash of Impostor Syndrome, because some part of my brain still has trouble with the fact that I’m a decent distance runner, but fortunately I didn’t have long to wallow in my dumb moment of pathos before we were sent off.

We started out with the 1:40 pacer and headed out onto the Ojai River trail. Brian’s plan was to stay with the pacer, while mine was to take off as soon as we started going downhill at mile five or so.

The first four miles or so were mostly uphill, and I spent most of those first four miles feeling like I was working too damn hard for the first part of a half-marathon.  I fell towards the back of the 1:40 pace group, which caused Brian to wonder if I was OK.  I was OK, but my stupid garbage brain was already trying to run its games on me: “Ugh, this is so hard. I can’t breathe. My legs feel like trash. This is a stupid hobby.”  I had to remind myself that the first miles of a race always feel like shit, and to stop being such a baby about it.

My RBF (Racing Bitch Face) disguises the fact that I was trying to convince myself not to quit three miles into the race.

Despite all this, I managed to click off some pretty consistent miles in the 7:27-7:29 range. Our pacer was like a metronome! He was fantastic.  And then, as predicted, my legs and lungs finally started to loosen up, and I had a strong fourth mile.

We went up around a loop and started on the section of the trail that went downhill. I picked up the pace and left the group behind, hearing Brian yell “Go get that PR!” as I gave a little wave over my shoulder.

Here’s where things got fun.

So when I trained for the Boston Marathon, one of the things I focused on was training my body to run downhill.  I used to run downhill in such a way that I jammed my legs into the ground to avoid feeling like I’m falling, which would shred my quads after a few miles and leave me with nothing left. I trained myself to make gravity work for me – to basically trust my legs to catch me as I fell forward and downward.  I put that to work for miles 5 through 10.

I thought about a half-marathon I’d run in December, where I’d tried to pace Brian to a sub-1:40. It became apparent at mile 7 that wasn’t going to happen, so I left him behind to see if I could still grab a PR.

I was about a mile away from him when I made the decision to see how far I could bury myself on that course. I wanted to see what it would feel like to run at the edge of my physical ability for as long as I was able to maintain it.  And so I ran like an animal, with no self-consciousness or no self-awareness at all, just the sensation of my legs and lungs and arms working as hard as they could. It was fucking transcendent.

I didn’t PR that day but I did run the last five miles of that half-marathon in less than 36 minutes, which still blows my mind a little whenever I think about it.

I made my way through those miles and into the streets of downtown Ventura.  At some point I decided to look at my Garmin and I realized that if I kept hauling ass the way I was, I had a shot at not just PRing, but maybe even breaking 1:35.

I didn’t let myself get too excited, though, because I knew there was a climb coming up towards the end of the race.  It wasn’t steep, but it was lengthy, and who knew how my legs would handle it?

In the middle of mile 10, I encountered the climb.  And suddenly I found out how my legs would handle it – they would handle it like crap. My cheetah legs had been replaced with brontosaurus legs. Instead of feeling like I was running fast, every step felt heavy and slow.  I looked at my pace. It’d dropped to a 7:40. FML.

I switched through my music and found Jimi Hendrix’s “Voodoo Child” and focused on my eyes on a spot ten yards in front of me.  It felt like it took forever, but the climb ended nearly a mile later, and we turned onto Sanjon Road, which had a steep decline before going onto the trail along the beach and then heading for the finish line.  My legs were so toast by then, though, that I could barely get my pace into the 7:20s, even though I was running on the steepest decline of the entire race at this point.

My pipe dream of sub-1:35 was not to be, but I also knew that if I maintained something below 8-minute miles I could still PR.  I just had to be steady and keep moving forward, and that’s what I did.  I knocked down those last two miles in 7:28/mile, and crossed the finish line at 1:36:22.

My Coeur Sports teammate Becca met me at the finish line – she’d come to the race just to cheer me on, the sweetheart – and we hugged and chatted for about a full minute before I turned around and saw Brian in his black and green kit. He’d smashed 1:40 to bits and pieces, finishing in 1:38 and change.

I was so pumped for him!  I still remembered several years ago when he ran himself into near-delirium to break 1:45, and here he was, setting PRs at an age when a lot of other men are hanging up their running shoes.  He’d been a little unsure about whether he had it in him to run a BQ, but this race really boosted his confidence, and he’s committing to training for one next year.

We ate some food and checked our results and discovered we’d both come in third in our age group! (We’re pretty sure this is because all the speedy people did the full marathon.)  We collected our cute little awards, and then headed out for breakfast with Becca in downtown Ventura.

I didn’t break 3:30 at Boston like I’d wanted, because it was too hot that day, but I have a feeling I can do it at Mountains 2 Beach.  So we’ll be back next year, and those BQs will be ours! 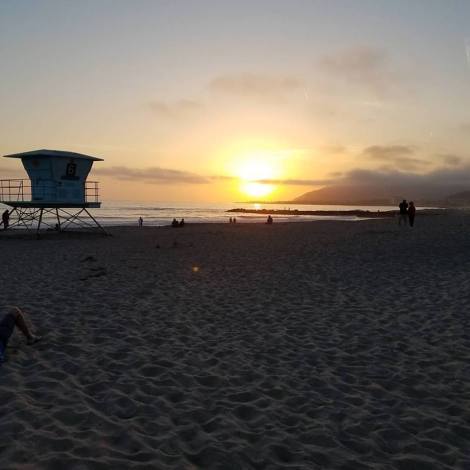