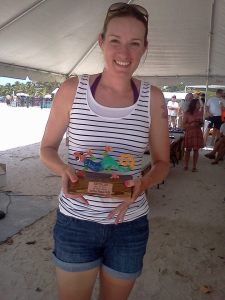 Welcome!  My name is Caitlin Constantine, and I do most of the writing on this blog. I started this blog in 2011 because I was really getting into fitness and health, and yet I kept encountering all of these things that made the feminist in me go “Whaaaa?”  What’s more – I didn’t feel like I saw too many people writing about fitness from a feminist perspective.  And with that, this blog was born.

By profession and education I am a journalist, and I work as a digital media producer for a TV news station in the Tampa Bay area, which means that I am one of those people who gets paid to write about Florida Man.  My work has appeared in Ironman.com, Greatist, Bitch, Jezebel and Huffington Post – you can read more about that here.  I’ve also been writing and publishing zines for over a decade.

I played sports as a kid and was even a varsity athlete in high school, but that was almost entirely due to the fact that I am taller than the average bear. The truth is that I sucked at playing team sports, so when I left school and entered “the real world” I gave up sports and most physical activity.  By the time I was in my mid-20s, the most exercise I got was when I walked to the corner store to buy cigarettes or around the block to get a beer at the local bar.

When I was 27 that I met my current husband, a former smoker and drinker who ran marathons and ate salads and who basically re-invented himself as this insanely fit, healthy person. After watching him finish a marathon, I decided to take up running myself.  It took a while for the habit to take hold but once it did, it took hard. Since then I’ve run two ultramarathons, five marathons, two half-ironmans, a couple dozen half-marathons and so many shorter road races and triathlons, I can’t even keep track of them.  Most recently, I qualified for the Boston Marathon for the first time, which was a dream come true.

Three years ago, I broadened my athletic horizons and got into triathlon, which I love nearly as much as I love just plain old running. I also lift weights a lot, both because it helps with running and triathlon and also because I love the way it feels.  I also dig stand-up paddleboarding, swimming and yoga.

Other things about me: I read almost constantly – books, blogs, magazines, whatever. I’m always reading.  I love to experiment with cooking and makeup.  I am obsessed with tattoos and love music of almost all kinds.  One of these days I want to get into gardening.  I love being outside, especially down here in Florida, which I am convinced is one of the most beautiful places in the world.  I love to meet people and to learn new things and to have long meandering conversations and to do things that scare the shit out of me. I volunteer as a guardian ad litem in the state of Florida and strongly encourage others with an interest to look into doing the same. I have a greyhound and three cats, and everything I own has fur on it.

That’s about it for now.  I hope you enjoy reading this blog as much as I love writing it!