I’ve spent the past couple of months in a bit of a funk, thanks to post-IM blues, the election and its aftermath, an ongoing family health situation that’s not looking good, and a bunch of other one-off things that wouldn’t have normally been so bad had my coping abilities not been totally depleted.

The annoying thing is that a lot of really great things happened for me in the past year, but I couldn’t make myself focus on those things.  All my brain wanted to do was wallow and anesthetize itself with episodes of Grey’s Anatomy and Gilmore Girls.

But then Jen of the Hippie Triathlete (which, by the way, you should read because it is so delightful!) approached me and some other female triathlete-slash-bloggers with a suggestion – why don’t we all do a “16 things” post where we recap 2016?

(ETA here are all of the posts from the other ladies: Erin, Hailey, Jen, Christine, Elizabeth, Liz and Laurel. Enjoy!)

It ended up being exactly what I needed – a dose of perspective and a reminder that even though 2016 was a dumpster fire in many ways, it was also a pretty good year for me on a personal level, and especially on an athletic level. So here’s my 16 best moments as an athlete from the past year.  Here’s hoping for many more in 2017. 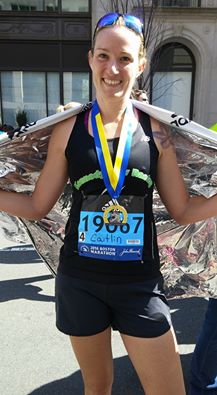 1. I ran the Boston Marathon.

I mean, how could this not be #1? It was only the culmination of several years’ worth of hard work and dedication!  I didn’t quite make my goal of going sub 3:30, but who the fuck cares? I RAN BOSTON.

I’m still struggling with this one a bit, just because I was disappointed in my inability to keep it together mentally during this race, but I’m also coming to understand that this is part of what makes Ironman such a beast – it’s a long day and a lot of shit can go wrong and you just have to be resilient and tough and know how to solve problems on the fly.

I’ll have another opportunity to see if I can put together a better race in 2017, as I signed up for IM Florida, where hopefully a flat bike course and an ocean swim will play better to my strong suits. 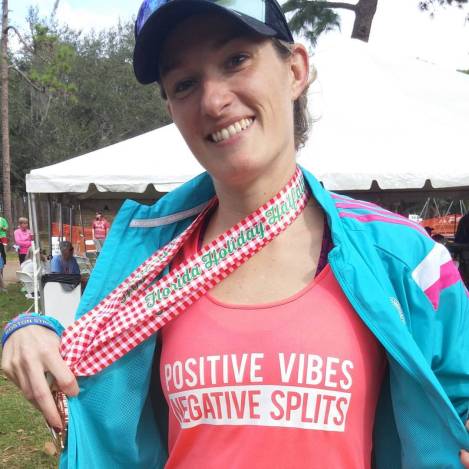 Definitely feeling positive vibes after crushing the last half of that half-marathon.

3. I PRed in the half-marathon.

Not only did I set a new PR of 1:37, but I also managed to run multiple sub-1:40 half-marathons, which is still kind of a wild feeling for me. My most recent one was two weeks ago, and not only did I finish in 1:38, but I ran the last half with the intent of just totally burying myself to see what was possible. I ended up running the last five miles in less than 36 minutes.  Bonkers. It was pretty awesome.

This PR had been hanging around since 2012, and I’d come close to breaking it but hadn’t quite managed.  Well, apparently I am a freak of nature, because Ironman training didn’t kill my top end speed.  On the contrary, a month after my Ironman, I ran a 5K and crushed that PR by 40 seconds.  And then two weeks later, I knocked another 10 seconds off.

5. I came in second OVERALL at a 5K – behind another woman.

That second 5K I mentioned in #4?  My friend Yova led the whole time, and I was right on her heels until the last half-mile. (Brian hung with us until the halfway point.) I kept looking around going, “Where’s everyone else?” but we were it. I mean, it was a small 5K – only 140 people – but still.  It was a weird feeling and I tried to relish it because who knows if that will ever happen again! 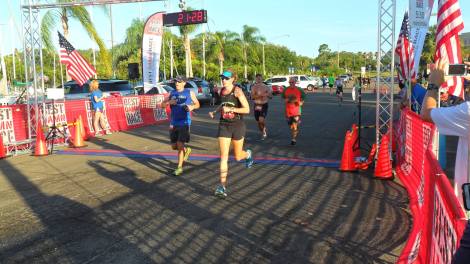 My headphones busted and it was crazy hot, yet I still managed to run my second-fastest 5K (at the time, at least) at this race.

That’s just sickening, y’all. Even more sickening is that I’m pretty sure I can do it. This item is basically #478,589,876 in the I Don’t Even Know Who I Am Anymore Chronicles.

7. I took part in my first masters swim meet.

This was a fun experience, even though I was by far the slowest woman in my age group.  (It was me and two former collegiate swimmers – yeah, I had no chance at all.)  I really had no idea what I was doing half the time, and at one point, I totally whiffed my dive off the block.  (Brian says I looked like this, which is also what I felt like.)  But it was something different than what I normally do, and while I’m definitely never going to be a great pool swimmer, I had a lot of fun and will probably do another one in the coming year. But I’ll make sure to practicing diving off the blocks first.

Coach Beth had to explain the rules of the two-hand wall touch during the breaststroke event to Brian and I because we didn’t understand.

8. I did the 2.4-mile Hurricane Man Roughwater Swim.

I watched Brian do this a couple of years ago and it looked really cool, so I signed up to do it this year, partly as a confidence booster for my Ironman but also because I just wanted to do it.  (Yeah, this is the same woman who used to be afraid of going into water past my waist.  Personal growth FTW!)  I struggled for the first half but I found the further I went, the stronger I felt.

Again, I was still one of the slower women – this event attracts mostly real swimmers; I don’t think you could pay a lot of triathletes to do an open-water swim like this even though they should because, you know, the “swim” in “swim, bike, run” – but I was still pumped that I swam the whole thing without stopping.  I didn’t even mind all the jellyfish stings. (OK, I minded a little.)

Me and Brian and a couple of women we met at the end of the Rainbow River swim in August.

9. I swam the Rainbow River.

One of the local swim coaches organized a series of swims in Rainbow River earlier this year.  Rainbow River is one of Florida’s beautiful spring-fed rivers, and the water is always clear and 72 degrees with a steady current. A bunch of us put on wetsuits, hopped in the water and spent the next hour and a half swimming with fish, turtles, river otters – oh, and also thousands of people on inner tubes, all of whom probably thought we were nuts. I’m looking forward to doing it again next year.

Brian and I signed up to be a two-person team for a 10K swim around Fort DeSoto.  We took turns swimming while the other piloted a kayak nearby.  Because this whole foolish enterprise was my doing, I swam three legs – for a total of four miles – through sea grass beds, in deep water, across boating channels, and finished up by swimming headfirst a serious current.

Because it was English Channel rules – no wetsuits, no touching the bottom, no touching the kayak –  I was exhausted and borderline hypothermic by the time I finished. We were also nearly DFL. But I didn’t care! I was enamored of the whole experience, and I’ve made it a goal to be able to do a full 10K swim on my own at some point in the near future.

11. I did my first-ever century bike ride – and then I did another.

I knew going into Ironman training that the bike was going to be my weakness, so I spent all summer riding and riding and riding.  I achieved my first century on the ultra-flat Suncoast Trail – took me nearly six hours but I did it. I did my second one during the Tour of Sebring in hilly central Florida.  That one was more of a struggle, mainly because it got so dang hot by the end of the ride.  But I plugged away and finally managed to turn over the third digit on my odometer during both rides.

I described the last half of this ride as “riding through quicksand on flat tires into a blast furnace.”

12. I raced elite for the first time.

I had a lot of feelings about the fact that we have a bunch of fast women in the area but almost none of them race elite, so I decided to say the hell with it, and signed up to race elite.  It was me and another woman, and the other woman crushed me by like 13 minutes or something. I still had the second fastest time of the women, so it didn’t feel like a total fluke.

I went back to racing as an age-grouper for the next two races, but I was so far ahead of the other women in my age group that it didn’t seem fair, so I finished out the season racing as a local elite.  I’ve already signed up to race elite a few times in 2017, and I’m hopeful that I’ll see more fast local ladies out there with me!

There’s a hot yoga studio by my house, so I started going last year during the cooler months and it. was. awesome.  Once I just accepted that I was going to end up sweaty and disgusting, I found I really liked it!  I mean, I was among the least bendy people in the class – no one is mistaking me for a Lulu-clad yogi with a spine like Silly Putty – but because I’ve learned to focus more on process and less on outcomes, I didn’t mind. (Too much.) I think the most important thing isn’t actually being able to do the poses perfectly; the most important thing is just making the effort.  I think that’s true of a lot of things in life, actually.

Of course, once it got as hot outside the studio as it was inside (which for us is, like, April), I took a hiatus, but now that it’s cool again, I will be going back soon.

14. I represented Coeur Sports this year.

Being an ambassador for Coeur Sports was definitely one of the most positive things that happened in 2016.  Not only did I get to help support a woman-owned small business that shares my ethics, but it also put me in contact with soooo many amazing women. I’ve been asked back to be part of the team in 2017, this time as a co-captain for the southeast region, and I’m really thrilled about it.

Plus some of my local friends (Keara and Lindsay) are on the team as well, and we’ve got all these ideas about things we’d like to do – things like clinics, events, group training sessions, all that fun stuff.  I get all excited and stuff when I think about what we’ll be able to do for our local women’s racing community.

Ugh, OK, real talk – I ran out of items.  So I’m going to finish up with two goals I’ve set for the coming year.

I feel bad because Boston was originally Brian’s goal, and I not only lifted his goal but then I achieved it before he did.  So now that we both have the same Boston qualifying standard – 3:40 – we are going to go out to California in May to run the Mountains to Beach Marathon.  It has a net downhill and is supposedly pretty fast, so we’re optimistic that we’ll both being able to qualify there.

16. Make All-American as a triathlete.

I had that as a goal this year and while I didn’t make it, I got closer.  Most of my USAT scores were in the mid-80s. Considering that I am racing in what I lovingly call “the fast bitches AG” (aka women 35-39), I know I’m doing pretty well. But I could do better, and I will.

OK, your turn – what did you do this year that was awesome?  What are your goals for next year?