It was over a year ago that I started telling Brian that I thought he’d be into doing an Ironman one day.  He says I put the idea in his head, but I maintain that I was merely identifying a latent desire before he’d even been aware of it, but either way, he ended up signing up for Ironman Florida 2013, which was held this past Sunday in Panama City Beach.

Brian had spent five months training for IMFL, which not only encompassed hours on each discipline but also reading his copy of “Going Long” by Joe Friel until it was dog-eared and testing out every permutation of sports drink, meal replacement shake and granola bar known to cheerleading and mankind.  I gotta admit, it was really inspiring to have a front-row seat to such an intense level of focus and dedication. It really made me want to step up my own game, which, as I enter week 7 of training for my January marathon, I realize is exactly what has happened.  More about that for another post, though.

A few days before the race, I teased him a bit, saying that I really hoped he had a good race because otherwise he’d blame me for the worst day of his life and I’d return from PCB not with an Ironhusband but with an Irondivorce, but the truth is that if I really thought he’d have a terrible time, I would have never suggested he sign up for IMFL and then allow the event to dictate the contents of our weekends and our joint bank account for nearly half a year of my life.

Fortunately my wifely intuition did not let me down, and Brian had a brilliant day at IMFL, finishing his first iron distance triathlon in a respectable 11:47, and best of all, looking happy and energetic each time he passed us on the race course.  He had nothing but glowing things to say about the whole experience: the volunteers, the course, the camaraderie, all of it. He loved every second of it. 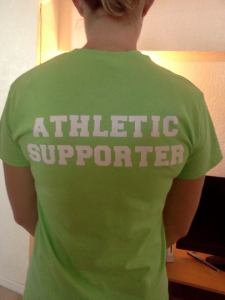 If you can’t be an athlete…

My role over the weekend had been that of cheer-squad coordinator, which was something I’d never done before but I took to as naturally as the proverbial fish in water.  I made t-shirts with iron-on decals for myself, Brian’s parents and his siblings. (The back of my shirt, in accordance with my role and my somewhat juvenile sense of humor, read “Athletic Supporter.”  See the above photo.) I bought bendy glow-sticks for us to wear after dark.  I made posters for us to hold, my favorites being “Toenails are Overrated” and “You’re never too old to cry for your mommy,” which Brian’s mom held.  It was like all of my dormant LDS-girl genes sprang back to life for just this one event.

But the truth is that pretty much the entire time – from packet pick-up to the swim start to the finish line – I couldn’t shake the feeling that I was on the wrong side of the race barrier.  I knew there was no way I could have been ready for this year’s IMFL, not even if I had started training with Brian from the very beginning. My body simply wouldn’t have been able to accommodate the volume, and I don’t have any experience at a half-iron distance that would prepare me for such a undertaking.

That self-awareness wasn’t enough to keep me from experiencing a piercing mix of longing and envy every time I saw triathletes with their blue wristbands.  I tried to sate it somewhat by doing marathon training runs in the midst of triathletes doing pre-race shake-out runs and then on Saturday by running ten miles of the actual run course, but it only made the feeling more acute.  I had already thought that maybe I’d like to target an iron-distance triathlon in 2015, but this past weekend solidified it for me.  I’m going to do one.  Not next year, but definitely the year after that.  Plans are in the works, yo.

None of this is to say that I didn’t enjoy the hell out of spectating.  I did, very much so. It’s just that…well…any other athlete who watches other athletes compete in their sport knows that feeling of displacement, especially when you are so passionate about your sport.  It’s hard to watch other people doing this thing you love when you are unable to do that thing yourself.

There are other things I noticed or experienced that I think might be of interest to the readers of this blog, but because I’m feeling a bit worn-out from traveling I’m going to take the lazy way out and list them with bullet points instead of trying to craft a coherent narrative.

So here ends my Ironman post for the year.  The next time I write about Ironman, I’m hoping it’s because I have signed up to do one.