A few months ago, my husband was watching “Hunted” on Cinemax while I was puttering around on the series of tubes, and after one particularly action-packed sequence where the female lead dispatches a whole posse of would-be assassins, he says, “I don’t mean to be sexist, but I can’t believe that she can just beat up all of those huge men like that.  Look at her! She’s so skinny!”

After a few minutes, he switched over to the UConn/Notre Dame women’s basketball game and we watched that instead.  At some point, UConn center Stefanie Dolson made a solid rebound, and I said, “Why don’t we ever see female action heroes that look like Stefanie Dolson? I’m way more likely to buy that she can beat up a bunch of guys than most of the actresses in these shows.”

My request was answered a few months later, after we joined the rest of the free world and started watching “Game of Thrones.”  Partway through the second season, we are introduced to Brienne of Tarth, a highborn woman who ditches the trappings of Westerosi ladyhood in favor of swords and fighting and knighthood.  Brienne is often the tallest person in any given scene, she wears her armor like a tank, and most importantly, when she fights off three attackers at once, you believe she could actually do it.

It should probably go without saying that I love Brienne of Tarth. Not only do I like that she kicks ass, but I like that she represents for all of us ladies who have heard over and over again that we are freaky and undesirable because we happen to be a lot taller than the average women (or average man, for that matter).  I get her defensiveness and her awkwardness.  I get it because I lived those things.  (And I’ll admit, I totally ship her and Jaime.  They are my OTP. And yes, I am aware that I am outing myself as a ginormous dork in this paragraph. But hey, at least I’m not the only one.)

But even putting aside my own personal feels on the matter – of which I admittedly have many that are quite strong – I have to say that I find Brienne of Tarth refreshing.  She is the proverbial tall drink of cool water in a desert filled with size-0 actresses who prepare for their action roles with “rabbit food” diets (h/t Scarlett Johansson during a press junket for The Avengers), which I suppose is understandable considering that the actresses who don’t go the rabbit-food route are showered with criticism for looking “too fat” (as with Jennifer Lawrence in The Hunger Games).

Hollywood’s insistence on giving us female action stars that still look rather underfed is a blatant example of pop culture-makers wanting to have their cake and eat it too. They want to be praised for having “strong female characters,” but they don’t want to deviate too far from the ever-narrowing standards of fuckability.  They want to make a grab for female fans but they don’t want to challenge the status quo too much. They want to appear modern while still clinging fiercely to outdated beauty standards.

The end result?  Movies and TV shows in which we are asked to unquestioningly accept the premise that a woman with arms courtesy of the Tracy Anderson Method (TM) can throw a punch that would knock out a dude who looks like he body-slams elephants in his free time.

You know, I get that there is a certain suspension of disbelief required when you get involved with pop culture. I am not asking for perfect realism here, but some nod to the realities of human anatomy would be nice, and the reality is that anyone – no matter what their gender – who wants to be able to kick some ass is going to need some muscle with which to propel the instruments of ass-kicking.  Male actors regularly spend time in the gym to put on muscle for these kinds of roles, because the role demands it.  Actresses undergo training, too, but the most important goal remains making sure they still look good in their mandatory latex catsuit.

It’s not as if the female action hero who actually looks like she can kick ass is foreign to Hollywood.  I mean, I can’t possibly be the only person who remembers Linda Hamilton in Terminator 2: 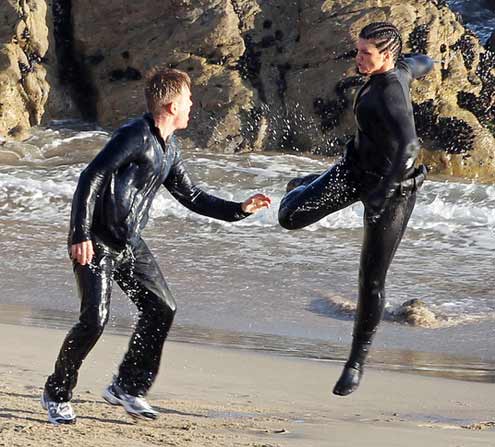 And what about Michelle Rodriguez in, well, everything: 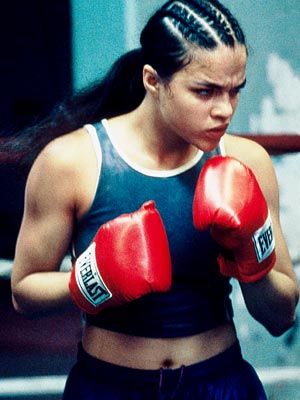 Don’t get me wrong: all of these ladies are still operating very much within the constraints of Hollywood feminine beauty. All of them are slender and beautiful and still recognizably feminine. It only required just the tiniest widening of acceptable appearances – in these cases, by allowing the women to have some arm muscles – for them to become believable as ass-kickers.

Even Gwendolyn Christie, the actress who plays Brienne of Tarth – a character who is mostly derided within the Game of Thrones world as being beastly and horribly unattractive – is really quite beautiful:

As I thought about this and wrote it, I realized that I was inadvertently making the argument that I don’t think thin women can be strong or can fight, which is not my intent.  Nor do I think that an actress is necessarily going to be unbelievable as a fighter just because she is thin. For instance, Michelle Yeoh may not have martial arts training but she has the skills to make her stunts look realistic, and I really liked Scarlett Johanssen as the Black Widow in The Avengers.  I’m sure we could all think of individual instances in which thin actresses made believable action stars.

This kind of lack of diversity of on-screen representation is one of the things feminist media critics address when they talk about the demographics of those responsible for making pop culture.  Five percent of directors are women and most of those directors are white.  Women of color are even more underrepresented.  Women are also underrepresented in screenwriting, producing, cinematography, editing, you name it.

But it’s more than just the fact that white men overwhelmingly dominate the creation of pop culture in our society.  After all, George R. R. Martin, who wrote the Song of Fire and Ice series, is a man, and a white one, too.  Most of the directors and the show writers are white guys, too.  I think it’s simplistic to say that white men are not incapable of creating art and pop culture in which women are given space to exist in a variety of ways, because they certainly do.

It’s more that a sensibility promoted by a certain kind of white guy is what dominates the way things are made. (You could call it the “Michael Bay effect,” I suppose.)  It’s the expectation that the only kind of woman who should be seen on-screen should be a fuckable woman, and that what is defined as “fuckable” is a very specific kind of female body and appearance, which in turn is transmitted around the world as the standard of female beauty to which we all should adhere (whether through emulation or through desire).

And if you want to get sociological about it, we can talk about how the seeming contradiction posed by these waif-like ladies who kick ass reflects other trends in our society at large, particularly the way many women and girls feel huge pressures to be perfect at school, their careers and their families, all while maintaining a flawless appearance and making the whole thing seem effortless.  “Yep, you can have it all, but you better make sure you look hot while doing it,” the overwhelming message seems to be. (In fact, a whole documentary just came out about this very thing.)

So when I think about the rise of Brienne of Tarth against this messy cultural background, the fact that she even exists feels fantastic.  That she’s a total badass makes it even better.  I just wish we had more of her.