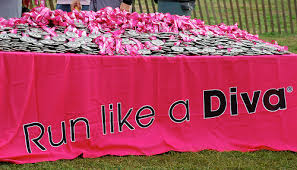 The last time I did a women’s race was the 2011 Iron Girl half-marathon in Clearwater, and by the time I crossed the finish line, I swore never again.  I had paid a considerable amount of money just to race as it was, but then the pre-race transportation was badly organized, which meant I was stepping off the trolley to the starting line more than seven minutes after the race started.  I didn’t get to stretch or go to the bathroom or warm-up or anything, so I was already in a right state by the time I started. I was already teetering on the edge of reasonableness but then all of the cutesy girly shit that characterizes the Iron Girl franchise pushed me right over into the land of “fuck this fucking shit.”

It was the third women-only race I’d done in two years.  I had also done the Women’s Running Half Marathon in St. Petersburg, which was another race I found exorbitantly priced and more than just a tad bit annoying, and another Iron Girl race.  Not even the fact that I got to meet Kathrine Switzer at the Women’s Running expo could make up for the things I disliked about the race.  I decided that women’s races just weren’t for me, and I haven’t done one since.

But then a couple of months ago I got an email about a race that would have seriously made me reconsider my “no women-only races” rule had it not been so far away.  On June 1, the Thelma and Louise Half-Marathon will be held in Canyonlands National Park.

Okay, let that sit for a second.  A Thelma and Louise Half-Marathon.  A half-marathon dedicated to one of the most ass-kicking movies of the 1990s, in which the women shoot a rapist and ditch one of the women’s shitty, domineering husbands and go tearing off on a cross-country crime spree and have dirty hotel sex with a deliciously hot, young Brad Pitt.  If you have never seen this movie, I insist you step away from this blog post and do not come back until you have seen this movie and can appreciate just how insane it was that such an overtly feminist movie could have ever been so mainstream (but then, I suppose, that was the 1990s for you).

If I still lived in Utah…shoot, if I lived even one time zone away from Utah, I would have signed up for this race faster than a ’66 Thunderbird could fly through the sky before crash-landing at the bottom of a canyon.

My enthusiasm for this race clearly illustrated for me that it wasn’t the “women-only” aspect of most women’s races that I had problems with.  I’ll admit that part of me disliked the idea that women needed to be coddled and cajoled into doing something athletic by having their own super-speshul races, far from all the scary boys and men, but the truth is, being surrounded by thousands of women was actually one of the things I dug most about doing the women’s races.

No, it was everything else about the races that left me feeling like the human embodiment of Feminist Hulk.  It was the insistence on referring to everyone as “girls.”  It was the cookies and the pink shopping bags and the pink swag and the pink pink pink everything everywhere was PINK.  (And I say this as a woman who actually really likes pink a whole lot. I just hate the idea that because I am a woman, I must lurve the color passionately and want everything I own to be pink.)  It was the vague sense that I was being condescended to, like I was some kind of delicate little princess who needed to be praised and told how special I was and how empowered I am by everything I do.

The version of womanhood being catered to was nothing like womanhood as I experienced it.  Where was all of the badassery?  The toughness?  The courage and the fierceness?  Did this collection of living-“Cathy” stereotypes really describe the only way the race organizers could envision femininity?

And the more I saw of women-only races, the more I felt like the organizers were operating off some really limited definitions of what it meant to be a woman.  Take the Nike Women’s Marathon, which touts firefighters giving Tiffany jewelry to finishers in lieu of medals.  Now, I like firefighters and I like jewelry (and truth be told, if I were to do that race that would probably be the only way I’d ever own something that came in that famous robins-egg blue box), but, as Courtney Szto pointed out, the assumption that every single woman alive is going to swoon for this to be rather heteronormative. As you know, not all women like men, a fact that I would have thought a race in San Francisco of all places would have been fully aware of.

And I have seen women-only races that include mentions of chocolate and champagne in their marketing materials, and that use vaguely suggestive titles like “Dirty Girl,” and that brag about having boa-and-tiara stations, or even an event that calls itself the “Jiggle Butt” race.  Shopping features heavily in the marketing, as does jewelry and princess and divas and high heels and a ton of other things that I just don’t relate to at all.

The Thelma and Louise Half-Marathon was the first time I encountered a women-only race with a concept and theme that made me feel like, hey, there might actually be a place for a woman like me at one of these things.

Obviously I know that just because something doesn’t appeal to me, that this doesn’t necessarily mean it will appeal to no woman anywhere.  On the contrary, I am aware that a lot of women love these races and are signing up for them, which is why they are proliferating like sparkly viruses.  And I also know that there are women out there who do love jewelry and princesses and tiaras and chocolate and that for them, this does not contradict their views of themselves as strong, capable, complex women.  And I also know that there are a lot of women out there who hate all of this stuff, but they do the races anyway for a variety of reasons: it fits with their training schedule, they want to run with their friends and family members, it’s local, whatever.

But for me, it all boils down to one simple thing, which is that I dislike the fact that the women-only racing community seems to have en masse decided to create an image of womanhood using the broadest sitcom-style stereotypes of frivolity and consumerism, then to exclusively cater to that image without seeming to consider the possibility that a lot of women – like, uh, me – find the pink-princess-shopping-champagne-diva stuff rather alienating.

I want more women to feel comfortable enough to get out and race, but is this really the way to do it?  (Evidently road-racing isn’t the only sport whose gender-specific marketing has left some, in the words of Sam, a bit “queasy.”  Check out her post about Cupcake Races and Heels on Wheels in cycling, in which she brings up some of the same issues I talk about here, except she does so in her very scholarly, smarty-pants way.  Oh, and read Tracy’s post about why she doesn’t think women-only races are inherently sexist, too.  Good stuff as usual from these two.)  Surely there has to be a way to organize women-only races that isn’t based upon lowest-common-denominator stereotypes ripped from the pages of Cosmo.

What do you think about women-only races?  I know y’all have opinions, because a few of you have asked me to write about this in the past. Spill ’em in the comments below.