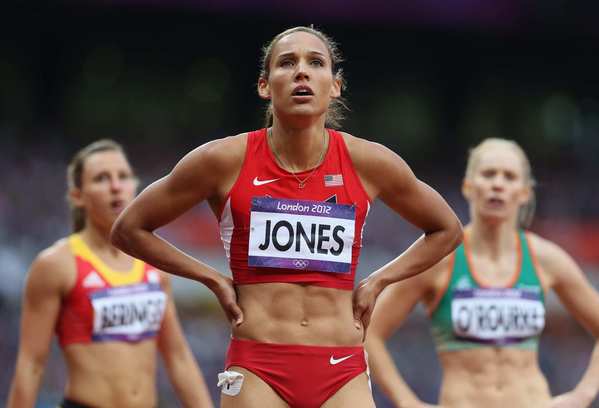 Lolo Jones came in fourth place last night during the 100m hurdles, a disappointing finish for one of the most visible Olympians in the United States.  Jones has been the subject of a lot of attention, first from advertisers and media types who find her looks and her back story to be the narrative equivalent of catnip, and then this week from a pretty scathing piece in the New York Times.

The criticism had an effect on Jones, who addressed it after she ran the semifinal race and again this morning when she appeared on the Today show:

“They should be supporting our U.S. Olympic athletes and instead they just ripped me to shreds. I just thought that that was crazy because I worked six days a week, every day, for four years for a 12-second race and the fact that they just tore me apart, it was just heartbreaking,” Jones said.

For what it’s worth, I thought the NYT piece made some good points, but whatever astute observations the author made were drowned out by the overarching sense of mean-spiritedness that permeated the entire article. (I mean, comparing Jones to Anna Kournikova?  Way harsh, Tai.)  It’s absolutely valid to ask why Jones, who did not medal in Beijing, is considered so much more marketable than Dawn Harper, who actually won the gold medal.  It’s important to talk about why Jones is a household name while few people know who Harper is.  I have my theories, and they cover everything from the way racialized beauty ideals are manifest in advertising to the media savvy of an athlete like Jones, who is comfortable giving media outlets the kind of information they know will attract page views and eyeballs.

I also think it’s important that we talk about the ongoing sexualization of our most high-profile female athletes, even when the athletes play a hand in said sexualization.  (Danica Patrick, I’m totally thinking of you here.)  When so many female athletes fight to be taken seriously as athletes and not just another walking stroke book, it can be frustrating when other female athletes have no problem marketing themselves as Hot Sexy Babes.  Ideally it would be awesome if we could all just do our own thing without it reflecting on each other but unfortunately we still have a ways to go before many people see individual women as individuals and not just a manifestation of the Female Borg.

That’s not what I’ve really seen a lot of people talk about. Instead, it seems like Jones’ greatest sin in the eyes of many is that she is a self-promoter.  She appears on magazine covers, she’s built herself up as a brand, she’s in tons of commercials, she even shares titillating personal information with the media. But this is the thing – Jones is a top athlete in a sport where, if she lets opportunities to be in national ad campaigns slide, she could find herself pretty much broke.  In track and field, even if you are at the top of your game, you will make just about as much money as if you had dedicated all of your time to working a minimum wage job flipping burgers in McDonalds:

According to CNN’s Money, “only 50% of American track and field athletes who are ranked in the top ten … earn more than $15,000 a year in income from the sport.” Many struggle to pay their bills.

People were outraged when they learned that weightlifter Sarah Robles was on food stamps, but she’s not the only one who has made huge financial sacrifices to be an elite athlete.  The mother of America’s newly-minted sweetheart, Gabby Douglas, had to sell her jewelry to help make ends meet.  We as the audience get to see all the glamour and glory, but we see virtually none of the sacrifice.

As Allen Barra points out over at Salon, Jones came from a pretty tough background that probably inspired her to make the choices she’s made, like Scarlett O’Hara in cleats:

Coming from a hardscrabble background, she offered none of the pious platitudes as to why she ran – she had talent, she had looks, and by God she intended to use both to make a good life for herself.

Can you really blame her for taking advantage of every opportunity she’s been given?  I can’t.  I may not like the fact that attention is disproportionately given to Jones over Harper or Wells, I may think it’s a little weird that she once said she thought it was harder to stay a virgin until she was 29 than to qualify for the Olympics, but I absolutely cannot blame her for being willing to take every financial opportunity that has come her way.  I would probably do the same if I were in her shoes.  (Although I would have passed on that weird bondage swimsuit she wore for the cover of Outside, and I would also have declined to provide status updates on the condition of my hymen, but that’s just me.)

All of the controversy made me think of another famous female athlete, one who is known for her looks and her media savvy as much – if not more so – than she was known for her athletic skills.  For several years, Gabrielle Reece was the face of beach volleyball.  She was on posters that hung in locker rooms (including the one my high school volleyball team used), she posed nude in Playboy, she hosted shows on ESPN and MTV, she was everywhere.

While I was on vacation, I read “Big Girl in the Middle,” the book she wrote with sports journalist Karen Karbo, which followed Reece through one ill-fated season with the Women’s Beach Volleyball League.  Reece has her share of athletic accomplishments, but she had a really tough season during the course of the book, a fact that was endlessly disappointing to the fans who came to see her play.  I’m sure some of her fans came away thinking that maybe their idol was overhyped.

But Reece was upfront about the fact that she was not one to walk away from opportunities, that she was willing to give everything a shot, that she wasn’t going to say no if she thought there could be some kind of benefit in it for her. She had the looks, she had the physical abilities, and they brought her opportunities to make money and to travel and to try new things.  She was not going to walk away from that.  Again, I can’t really blame her.

It’s like there’s something distasteful to people about the sight of an ambitious woman who wants to…well, who just wants.  Bill Plaschke of the LA Times points out that people don’t really have this kind of vitriol for guys in similar situations:

Yet when Olympic athletes seek and embrace this publicity, they are criticized unless they have the medals to back it up. We chuckle at a guy like Terrell Owens working the system even though he has never won a Super Bowl, but heaven forbid an Olympian does the same thing, and shame on that Olympian if she is a woman.

I don’t know.  It’s complicated, and I’m still trying to figure it out. The only thing I do feel comfortable saying for sure is that I don’t think it’s a bad thing to be willing to hustle and promote yourself, especially when it means the difference between being broke and being able to have a comfortable life.  It’s a shame that Dawn Harper and Kellie Wells have been ignored by the media and by advertisers, no doubt about that.  It sucks that Harper was in borrowed spikes when she won gold in Beijing. But that’s not Jones’s fault, and we need to stop acting like it is.

P.S. Mad congrats to all of the ladies who medaled last night, including Girl Crush Chronicle alums Sally Pearson and Kellie Wells!  Man, I could watch Sally Pearson leap like a gazelle over those hurdles for hours.  She’s spectacular, and it’s a shame that all of the drama surrounding the Americans is overshadowing the fact that the lady is amazing at what she does.