A few months ago, I bought a couple of pairs of New Balance compression shorts that are only slightly less revealing than bunhuggers.  I guess you could call them boyshorts.  Anyway, I bought them after admiring the way they looked on other female runners.  I won’t deny that I felt a little awkward the first few times I wore them out for a run, like I thought maybe I looked like I’d forgotten to put on my pants that day, but once I became acclimated to running in them, I found I preferred them to all of my other running bottoms.  The lack of fabric was freeing, and as it gets super-hot here for several months out of the year, they also helped my body stay a bit cooler than they would have otherwise if I was swaddled in baggy shorts or, even worse, running capris.  (Nothing against the running capri, but I’d rather let the world see my cellulite bounce about than wear them while running in August.)  I feel like my legs have the ability to move faster and to stride longer when I run.  I love them, and you’ll have to pry them out of my cold dead hands if you want me to stop wearing them.

I’ve become so attached to my teeny little running shorts that I can’t help but feel a bit miffed whenever well-meaning fellow feminists point at them as evidence of the sexualization and objectification of female athletes.  Putting aside the fact that I don’t necessarily think it’s a bad thing to do and wear things that make you feel sexy, the idea that wearing short shorts or a sports bra might actually be more comfortable for some women seems to be foreign to these women.  I thought about that this morning while reading a post from B.J. Epstein at the Huffington Post entitled “Objectifying Women: The Latest Olympic Sport.”  In it, Epstein – who admits up front that she has only a passing familiarity with athletics – writes:

And why do female runners wear tighter, shorter shorts that show their every curve than male runners, who may wear skin-tight shorts sometimes but are also seen in looser, airier outfits? If the reason has to do with air resistance and speed, then presumably men would demand those slinky outfits too.

She goes on to question why female gymnasts wear so much make-up, why sports bras seem so thin and why all body hair is waxed from the athlete’s bodies.  (As for the last one, I’m just going to volunteer that if my body was going to be displayed prominently on global television, I’d probably get my ladyjungle waxed, too.)

There seems to be this ongoing obsession with the fact that a lot of female athletes are choosing to wear clothes that are revealing, as if we are single-handedly setting back the cause of feminism and womanity and progress and unicorns and kittens by opting for something tighter and shorter than the male athletes.  I recent read an interview with Olympic beach volleyball player Kerry Walsh in which she expressed exasperation at the questions she gets about the fact that she and her partner, Misty May-Treanor, wear bikinis when they play:

We’ve been asked pretty aggressively, why would you ever choose to wear a bikini and it makes sense. It’s not as dramatic, but it would be like asking a swimmer to swim with shorts and a shirt on. It gets in the way. I’m really grateful for my uniform, I’m really comfortable in it at this point and again, I’m out there being an athlete, I’m not out there being a sex symbol. I think it’s a beautiful thing, the body in motion, and it works.

I think that a lot of the female athletes who choose to dress in this fashion would tell you similar things – that we dress this way because we feel most comfortable this way.  Frankly, I can’t wait for the day when I feel comfortable enough with myself to run in just a sports bra and shorts.  Clothes are kind of a pain in the ass; just ask any woman who takes off her bra and pants the second she walks in the door after she gets home from work.

There’s another angle here, too, which is that people seem to want to know why women don’t dress like their male counterparts, who tend to wear longer, baggier outfits when they work out.  The idea seems to be that we should be dressing more like them if we want to be considered equal as athletes.   Well, what I want to know is why men have started wearing longer, baggier clothes when they compete.  Male athletes didn’t always used to wear manpris when they played basketball:

And they didn’t always run track and field in the equivalent of long bike shorts:

And hello?  Need I remind anyone about the Speedo? And lest you think this is a historical relic reserved only for the 1970s and Europeans, allow me to disabuse you of that notion: 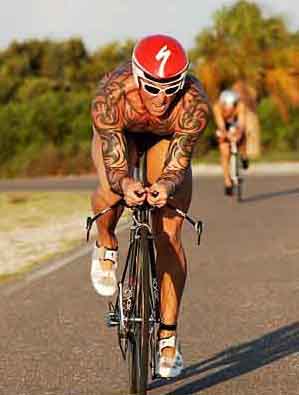 This guy, Eric Hall, is a top triathlete who competes in my area.  I’ve actually seen this man in person, and he’s a fantastic athlete.  He’s not the only one dressed like this.  Another top local triathlete wears a pink Speedo when he competes.  How’s that for shoving gender stereotypes right up everyone’s asses?

And need I remind everyone that the men who used to compete in the Olympics used to do so whilst naked?

If we are going to hound people about their choices of clothing when they compete, let’s be fair about it.  If we are going to badger female athletes about their choice of competition apparel, we should also ask men why they feel so uncomfortable wearing anything that shows a hint of skin or body shape.  I can’t be the only one who has noticed that men’s sports clothing has grown longer and baggier over the years.  Even in baseball, the pants that used to be tight are now loose and wrinkled around the ankles.

Yet why do I never hear people asking about this?   I’ll tell you what I think.  I think that the reason why changes in men’s sporting apparel go without so much as a raised eyebrow is because the choices of straight cis men are consistently held up as the ideal standard of behavior for all of humanity.  When women do not meet that standard, for whatever reason, our behavior is subject to criticism.  If we prefer romantic comedies to action movies, it’s because we are silly little weak-minded bunny rabbits.  If we choose to wear clothes that are revealing, we are contributing to the sexualization of all women and/or we are trying to get the attention of straight men.  And so on and so forth – you get my point.

There’s nothing inherently wrong with wearing revealing clothes when competing in sport, just as there is nothing inherently wrong with wearing clothes that cover more skin.  So please, can we stop talking about bun huggers and sporting bikinis and sports bras as outerwear as if they are the harbinger of doom for all womanity?  As a female athlete who chooses to dress in this way, not only do I find the implication misguided, but I also find it downright insulting.

104 responses to “A defense of skimpy running clothes”