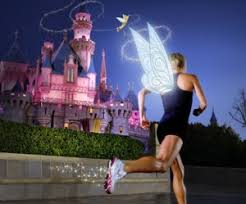 So more and more women have taken up running in recent years, which obviously I think is great, but along with it has come this proliferation of running shirts emblazoned with cutesy sayings like “Does this shirt make my butt look fast?” and women-only events like the Disney Princess Half-Marathon and the new Disney Tinkerbell Half-Marathon, all these things I end up feeling totally conflicted about.

On one hand, I love that there are all these shirts out there that create a definition of femininity that is competitive, athletic and hardcore.  And I also have really enjoyed the women-only races I’ve taken part in, because they have a tendency to bring out women who would otherwise be too intimidated to show up at a co-ed road race.  Plus, it can be very cool to see a sea of ponytails in pink streaming through the streets in the early-morning hours.

But sometimes I wonder if these things aren’t so much about creating a definition of femininity that is competitive, athletic and hardcore as they are about re-defining running as something that is non-threatening and ladylike.

I think about all of the ladies I see who show up to races in full faces of make-up, who wear perfectly matched running gear, who slow down and pose for running photos instead of blowing right past the photographers.  I think about the women I’ve seen who carry tissues so they can demurely get rid of saliva and blow their noses rather than spit or shoot a snot rocket.

I obviously cannot say, because I am not inside of their heads.  Plus, just because I see something one way does not mean everyone sees something that way. And finally, I am loathe to engage in any sort of girl-hate, and to especially be one of those people who scoff at all things girly and feminine.  That’s not just my style.  People are free to express themselves however they choose, and they don’t have to have my approval before doing so.

But a fully made-up face?  For a half-marathon?  When it’s just going to slide off your face?  Why?

The traditional trappings of femininity certainly serve their purposes.  They can be fun, they can be alluring, they can be sexually appealing, they can ease one’s way socially, they can just be pretty.  I know I indulge in my share of them, and I definitely like the way they make me feel.

But sometimes it all gets in the way.  It can make you overly self-conscious.  It takes time, and it takes energy.  It can limit your options for physical activity.  You might find yourself pulling back a bit, lest you appear to be less than perfectly feminine.

I’ve noticed in my own life that the less self-conscious I am about the way others see me, the more I lose myself in the sheer physicality of the moment, the better I am at my chosen sport.  I’m not all caught up in what others think when they look at me, in whether I’m being too gross by spitting when I run or if I’m sweating too much to be attractive.   It’s just me and my body, doing something that makes me feel alive and good.

(Come to think of it, I see a lot of parallels here between sex and sport.  Lots of women have said that feeling self-conscious about their appearance keeps them from enjoying sex.  I don’t think it’s all that different when it comes to sport.)

When I’m operating at a level of peak performance, it’s like I cease to be a woman anymore.  In fact, it’s almost like I am no longer human.  I am no longer “Caitlin” and all of the various facets that comprise my identity, like ‘woman’ and ‘white’ and ‘American’ and ‘educated’ and ‘writer’ and ‘nerd.’

Instead, I become sinew and muscle and bone and blood and sweat and saliva and iron-clad will.   I become an animal.  And I like it that way.

So next time someone says to me, “You run like a girl,” I’ll just tell them, “No, I run like an animal.”