Over the past couple of weeks, a handful of stories caught my attention, all of them having to do with the role of women’s clothing in sports and fitness. Ironic how that happens, huh?  It’s like this is an ongoing issue or something!

Badassery, thy name is Kulsoom Abdullah.

Kulsoom Abdullah, 35, is a weightlifter who wants to take part in Olympic-style competitions. Her desire to do so has led to a bit of a stir:

The Atlanta resident wants to take part in tournaments in the United States, including one coming up in July. But USA Weightlifting informed her that those events are governed by IWF rules. And those rules preclude her dressing in keeping with her beliefs.

Abdullah generally wears loose, long pants past the ankles, a long-sleeve, fitted shirt with a loose T-shirt over it, and a hijab, or head scarf, covering her hair.

The outfits — officially called “costumes” — worn at competitions must be collarless and must not cover the elbows or knees, according to the IWF’s technical and competition rules.

The IWF constitution also states that no distinction is made among individuals based on religion.

Mark Jones, a spokesman for the U.S. Olympic Committee — which oversees USA Weightlifting and many other sports — explained part of the challenge is that judges need to see that a competitor’s elbows and knees are locked during a lift.

In this case, it sounds like the dilemma is being handled respectfully and with care, and that the organization is actually going to work to find a compromise. This is in contrast to the decision of FIFA to ban head scarves from soccer matches, which lead to the Iranian women’s team forfeiting their matches.

In both cases, there are very practical reasons as to why the sports officials put the dress codes in place, so I’m not willing to say these are simple cases of Islamophobia.  But at the same time, if a sports organization wishes to be truly available to athletes from all around the world, there should be room in the dress code to allow ALL athletes to compete.  As more Muslim women become interested in competing as athletes (which is bound to happen, just as it has happened in the U.S.), that means more Muslim women are going to find themselves facing this problem.  Officials would do well to address this now rather than wait until it becomes an even bigger issue.

The Badminton World Federation recently tried to institute a dress code in a blatant attempt to appeal to advertisers and would-be dudebro fans:

To create a more “attractive presentation,” the Badminton World Federation has decreed that women must wear skirts or dresses to play at the elite level, beginning Wednesday. Many now compete in shorts or tracksuit pants. The dress code would make female players appear more feminine and appealing to fans and corporate sponsors, officials said.

Quick! Put on a skirt before someone mistakes you for a dude!

This story is a double-whammy of suck.  First of all, not only are they trying to disrupt what already works for the players in an attempt to be more marketable, but they are also pretty much coming out and admitting that they think female athletes are too masculine to be appealing and attractive.

This genius idea came about with the assistance of a marketing firm.  That’s right – the profession that regularly brings us ads in which women are categorized as vapid sex kittens or male-heart-eating harpies has also decided women’s badminton needs to be sexier.  SHOCKING.

As Brian noted the other day during an ill-advised foray into the local Wing House (what was I thinking?), just as we’ll probably never see a restaurant featuring male waiters walking around in tighty-whities, we’ll never hear marketers saying men’s sports would be more appealing if the athletes could just show some more leg.

At any rate, the outcry was so loud that the BWF backtracked on its decision.  Retrogressive sexual ideals: 0, reason and sanity: 1.

The bikini as a badge of fitness

I wear a bikini.  I have for many, many years, even back in my days as a good Mormon girl.  Initially it was because I was too tall for regular one-piece suits, but after I made the transition and saw how freeing it was to not have a torso covered in synthetic materials when swimming and kayaking and engaged in other acts of water-oriented frolicking, I kept on keepin’ on with my two-piece swimsuits. 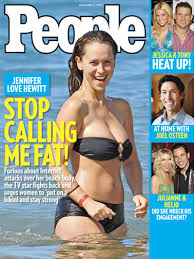 But the bikini has become more than just another option for swimwear:

Back then, bikini preparation was starkly laissez-faire by today’s grooming standards. In her recently published literary memoir, “Art and Madness,” Anne Roiphe wrote that in 1965, she suspected that a suitor was into her because of, not in spite of, the “tufts of dark hair that stuck out of the top of my bikini.”

But today it’s assumed that only the lean, muscular, hairless and ab-defined will feel comfortable in a bikini. “It’s become difficult to feel natural with a normal body,” Ms. Kennedy said. “Fatism has taken over. It’s O.K. to be mean to lumpy, lardy people. It’s a sort of subtle intolerance towards people that’s very bad.”

Thanks to the ubiquity of cameras, wearing a bikini is now scary even for gorgeous celebrities. Remember how Jennifer Love Hewitt was pilloried in 2007 for the crime of wearing a bandeau without being a size 0? Helen Mirren was accused of having had surgery when she dared to flaunt her (taut, toned) 62-year-old stomach in a tomato-red bikini a year later.

Yep, this is about right.  I mean, you can pretty much tell when summer is about to hit (besides, you know, looking at a calendar and such) by the proliferation of ladymag headlines pimping plans to help their readers get “bikini ready” fast!

So now what started out as a symbol of playful sexual liberation has become yet another marker by which women’s bodies are judged and found wanting.

One response to “Hijab, skirts and bikinis: clothes and the lady athlete”